Our funeral directors in Kingswood, Bristol, offers attended and unattended funeral services, along with The Bristol Funeral, which takes place at one of our special and unique venues. We also provide prepaid funeral plans and all other related services.

About our Kingswood funeral home

Formerly Roy Preddy Funeral Directors in Kingswood, our Bristol team at R. Davies & Son is here for you in your time of need. From our Kingswood funeral home, we serve the local and wider communities, and can arrange a dignified funeral for your loved one.

With extensive local knowledge of Kingswood and the surrounding Bristol area, we can ensure your loved one's send off is a fitting testament to their life. Providing the highest standard of funeral care, our tailored support means you'll receive all the guidance and advice you'll need, from our experienced team. Caring for your loved one is equally important and you can rely on us to treat them with respect and dignity from the moment they are brought into our care, right through to the committal on the day of the funeral.

You can find us on the High Street (A420) at the corner of Church Road, opposite the Holy Trinity and Kingswood Park. Our location makes us easily accessible to the Bristol communities around us, such as those in Barrs Court, Hillfields and Soundwell. 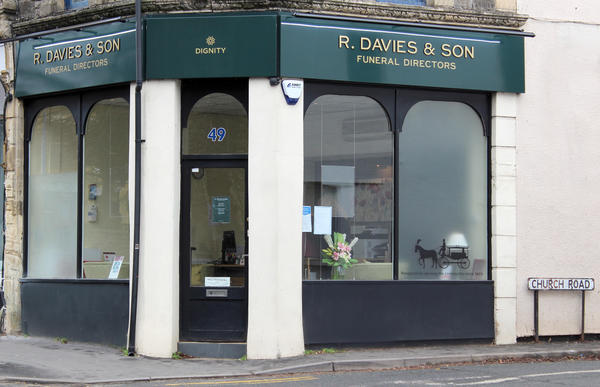 To discuss your needs with one of the professional team at our funeral directors in Kingswood, call 0117 944 6051 today.

We are located on Kingswood's High Street, at the corner with Church Road, opposite the Holy Trinity Church.

We have space reserved in the church car park opposite our funeral home, please call us for details.