An established part of the Whitchurch and South Bristol community, we offer a range of funeral packages, along with tailored support, in your time of need.

About our Whitchurch funeral home

Originally Whitchurch Funeral Service, before changing our name to R. Davies & Son Funeral Directors in 2018, we have been providing families like yours, in Whitchurch and South Bristol, with professional funeral care for more than a decade. If you have lost a loved one and need to arrange a funeral, speak to one of our caring team about how you wish to say goodbye.

We are here to help ease any concerns you may have at this difficult time. Whether you want a traditional funeral or something more contemporary, our sympathetic funeral experts will offer you guidance and advice, helping you to make a decision that suits you and your family's needs. With attended and unattended funeral options, you will be able pay your final respects in the dignified manner you choose. You can read more about our funeral packages below.

Our funeral home here in Whitchurch can be found on Gilda Parade, which is on the Wells Road (A37), opposite the Esso garage. We serve the surrounding areas of Bristol, including Brislington, Hengrove and Knowle. 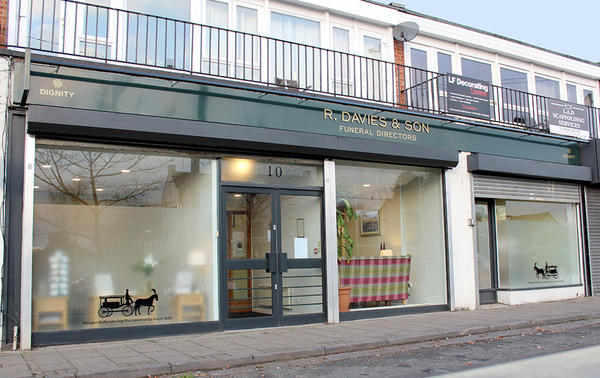 Talk to our funeral directors in Whitchurch about arranging a funeral, whenever you need us. Call 01275 833441, and we will be here to help.

Our funeral home is on Gilda Parade, which runs adjacent to Wells Road (A37), opposite the Esso petrol station.

There is two-hour parking available outside our funeral home and bus stops nearby.
Our funeral home is on one level, except for a small step on entry, so is accessible for those using a wheelchair or mobility aids.